Labels: IT Advisory, IT Strategy, Strategy

Linkage of Corporate Strategy to IT Strategy via IT-CMF


Why IT - CMF For IT Strategy - It differs from other IT frameworks in several fundamental respects:
• It is comprehensive. While other frameworks focus on one dimension of IT management—for example, ITIL (Information Technology Infrastructure Library) concentrates on infrastructure and operations, while CMMI (Capability Maturity Model Integration) focuses on application development—the IT-CMF examines the full spectrum of dimensions.

• It is holistic and value-focused. Other frameworks tend to focus solely on IT process maturity, which by itself does not create business value. The IT-CMF, however, focuses on the business value delivered by IT and how a combination of process, skills, culture, and tools can maximize that value.

• The IT-CMF is also action oriented. An IT-CMF assessment not only confirms the IT organization’s current maturity for a given capability or set of capabilities, it also defines both short- (that is, 12-month) and medium-term (that is, two- to three-year) target maturities and the results the IT organization could expect to achieve by hitting those targets. Further, it identifies the specific steps necessary to achieve those targets, as well as appropriate metrics to use to track progress—and can provide case study examples of companies that have taken similar measures.

• Finally, the IT-CMF is not disruptive. Assessments for some frameworks require armies of consultants with clipboards and can be highly disruptive to day-to-day operations. IT-CMF assessments, in contrast, can gather the necessary information and achieve a credible degree of rigor without being obtrusive.


Overview on IT - CMF can be found here. 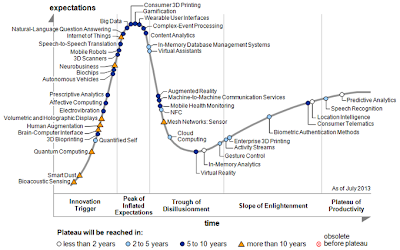 IT Economics for Business - II


Real Options Valuation (ROV):
A complex technique than TCO, ROI and EVA. It is based upon the financial estimation techniques used in stock options theory. ROV is used to modify the ROI calculation by considering the value that the current project could contribute to future projects. This approach typically enhances the ROI of projects such as IT infrastructure. The cost of implementing a whole new infrastructure for just one project for one business unit’s needs is so burdensome that no one business unit could ever justify starting the new infrastructure. However, the overall value of the new infrastructure to all the business units in the organization could be huge. ROV provides a technique for justifying that first project based on the future derived value.

Return on Assets (ROA):
A popular measure for the performance of companies, ROA can also be applied specifically to the IT assets.ROA for IT assets can be calculated by isolating the IT-specific assets from the organisational assets and the net income due to IT assets from the overall net income. This can be hard to do, and the accounting systems need to be set up appropriately to provide any chance of achieving this on a repeatable basis. ROA approach has deeper implications than might be immediately obvious.

Return on Infrastructure Employed (ROIE):
ROIE is similar to ROA, but it focuses on IT services rather than IT assets. With ROIE, IT service cost (including depreciation) is the basis for computing a return. While ROIE can be used for a single project, it works best when calculated for aggregations of projects. For example, it might be used to compare the performance of different in-house or outsourced IT Providers. ROIE might be improved by providing the same IT service at a lower cost or by containing the cost growth of providing a particular IT service to less than the rate at which the organisation’s net income is growing.

Source/Credit: The Business Value of IT
Posted by at Sunday, September 01, 2013 No comments:

IT Economics For Business - I


Total Cost of Ownership (TCO): It seeks to capture the full cost of an IT asset from initial purchase through implementation and operation to maintenance and “end of life” costs. This is a cost-based approach that does not equate to value. It is useful for measuring IT value because it allows comparison of alternative implementations that will meet the same business need and, presumably, have very similar values to the business. If the TCO of one alternative is significantly less than the others, it represents better value for money. It includes consideration like training costs, security costs, scalability costs, and the costs of reliability deficiencies. TCO incorporates perspectives that are not purely financial.

Limitation: It involves predicting future costs. This limitation can be minimised over time by tracking actual costs but, by then, the investment decision has been made.

Return on Investment (ROI):
It means calculating the revenue that the business generates or the costs that it saves in return for the investment that it is making. For an IT investment to be approved by the business, the IT Providers and the business must work together to demonstrate that the business will get its money back with a nice profit in an acceptable period of time (the payback period). In reality, ROI is typically expressed as a percentage of the investment, either annually or over the duration of the project, with the cash flows rendered as net present values. Typically, the assumed discounting rate is called the internal rate of return (IRR). It is linked to the cost of capital of the business or the amount of interest the business will pay to borrow the money to make the investment. Acceptable IRRs and payback periods vary immensely from business to business. Still, an IRR of at least 20% and a payback period of one to three years are the reasonable starting point for a discussion. It is very widely used to justify IT investments, particularly for new projects. Having said that, there is still the problem of predicting the future; ROI provides a good way to compare the financial value of very different projects and provides hurdles, through the payback period and IRR, that quickly cut off further, costly consideration of some projects.

Limitation: Organisations often have good systems established for making their investment decisions using ROI. Still, they may have weak systems for monitoring the actual ROI achieved and using historical data on project ROI results to inform their current and future investment decisions. Another limitation with ROI is that cost savings must be in real money rather than theoretical “efficiencies.” For example, a projection that an IT investment will save the business 12% of staff time is only a real cash flow if it results in 12% less staff employment. It is fair to note that the staff may not necessarily be terminated but may deploy their efforts to other productive work; however, this is rarely monitored or measured carefully.

This approach starts with the assumption that the organisation exists to provide economically value to its shareholders. This may not be entirely true for not-for-profit organisations, but the approach still has value. The calculation and comparison of Economic Value Added is very similar to ROI except that the benchmark used for making investment decisions is not the IRR but the opportunity cost of using the money to make other business investments (e.g., leaving the money in the bank rather than funding projects).

Source/Credit: The Business Value of IT
Posted by at Sunday, September 01, 2013 No comments: